Two 2 Glenmore athlete’s made the long trip to Athlone IT last weekend to compete in the Leinster Indoor Championships.  On Saturday Katie McDonald competed in both the u13 long jump and 60m sprints. Katie jumped well finishing in the top half of the field in the u14 long jump..  Next up was the  60m sprints which saw the biggest field of the competition with 57 girls running in 8 heats.  Katie competed strongly in her 60m heat to make it through to the semi final where she was narrowly beaten for a place in the final.  Sunday was the turn of Molly Anne Moore to compete in u12s long jump, 600m and 60m hurdles. She finished in the top half of the field in the long jump before taking to the track for the 600m heats. She ran the race of her life to take 4thplace in a very fast heat. She narrowly missed out on a place in the final as a fastest loser by less than 2 seconds.  Next up was the  60m hurdles. This was Molly Anne’s first time competing in this event and she stormed through her heat to the final where she finished in 4thplace, just outside the medals. Well done to both Katie & Molly Anne.  The girls can look forward to continuing their great performances in the upcoming track and field season. 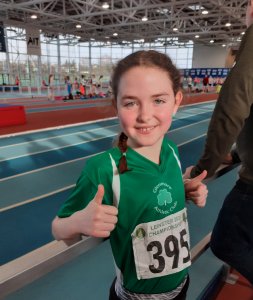 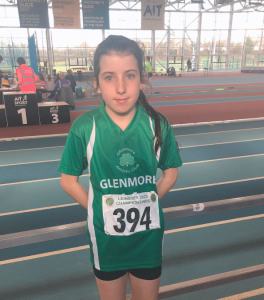