On a cold and wet March morning 44 juvenile athletes from Glenmore AC braced the rain for the last cross country event of the season. Celebratory 50th Anniversary medals were up for grabs along with the Johnny Mullen Cup for the best juvenile club on the day. First up was Maeve Walsh in the girls U9 500m who came storming home in 4th place to claim the first medal of the day for Glenmore.  Jonah Moore & Oisin Gallagher were next up in the boys U9 narrowly missing out on top 10 medals.

Elliot Nichols ran a strong race to take 8th place in the boys U13  1500m. He was followed home by Christopher Conlon,  Cian Magee, Peadar Walsh and Craig Tuohy who all represented the club well.

Next up were the U15 girls 2000m who competed very strongly with Lisa Conlon claiming 2nd prize, Ava Brady took 4th with Ava Ashby taking 10th place medal. Lucy White and Sarah Mallon also competed well. James Dunne was the solo Glenmore athlete in the boys U15 finishing with a 6th place medal. Blathnaid Murphy battled through the rain to claim a medal in U15 3000m. Ciaran Flynn finished the day on a high leading the field home  to claim the final 1st position of the day.

The  club would like to congratulate Bohermeen AC on winning the Johnny Mallon Cup.

Registration for ‘Fun on the Run’ takes place on Tuesday 12th March at 7pm at Bush track with training for Fun on the Run commencing on the 19th March. 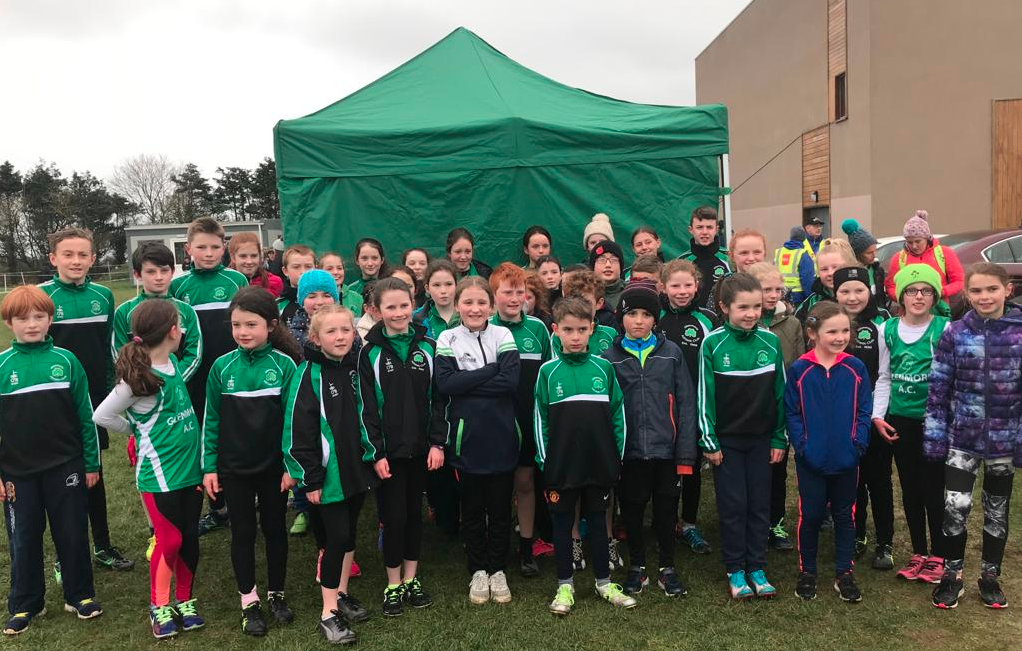 Kicking off our 50th anniversary celebrations was the first of our annual events The Kearney & Mc Bride Cups 5K, Congratulations and well done to all the Athletes who turned out on such a wet, cold day at the Bush, Riverstown on Sunday 3rd March, and also to those who came along to support and celebrate with us. A well earned commemorative medal awaited each athlete at the finish line along with the customary after race treats that Glenmore AC are so renowned for. It was also very noticeable and very much appreciated the support given by so many athletic clubs from throughout Co Louth and beyond.

Liffey Valley AC made it worth their while to travel to the Cooley peninsula as they picked up both 1st male and female team prizes. The Mc Bride cup was presented by Ambrose Mc Bride to the winning male team and Rose White (Glenmore chairperson) presented The Kearny cup to the winning female team, big congratulations to runner up teams Drogheda & District AC (male) and Dunleer AC (female).

A big thanks to past and present club runners, especially Sinead Mc Donald, a former club member ,who brought the two winning teams down from Liffey Valley AC . Thankyou to the Redcross and landowners, to John and Mary McGeown and to John for stepping in as our race starter in place of our regular starter, Tommy Nearey, the club wishes Tommy well, Thank you to all the stewards and canteen ladies for their invaluable service and to the committee members, who work tirelessly and effortlessly behind the scenes, in putting together an event such as today’s that so many can get to enjoy.

Carlingford Half Marathon and 10k

A big shout out to all the Glenmore senior athletes who doubled up at the weekend and also competed in the very popular and very well supported Carlingford Half and 10k, in aid of St Bridget’s Special School, Dundalk, the atmosphere and sportsmanship was excellent despite the deluge on the day. Congratulations to Peter Noone for taking 2nd place in the 10k event and earned himself an new PB and a few others who achieved PBs as well !! Well done John Doyle (01:36:18 )PB , Christopher Connolly (01:37:52), Ronan Callan (01:45:59) who completed the Half and Peter Noone (38:27)PB and Dara Fagan (56:49 )PB who also completed in the 10k event.

Glenmore senior athletes will continue their usual training sessions at the Bush track Wednesdays at 7 – 8pm , also Tuesday/Thursday early morning runs are proving very popular in Carlingford. Varied distances at weekends. If you are interested in any of these sessions or, perhaps want the extra support and company of running within a group , please check us out on https://www.facebook.com/fitforlife.glenmoreac/ and twitter @GlenmoreAC for further details of our scheduled training sessions. Distances and levels to suit all!!